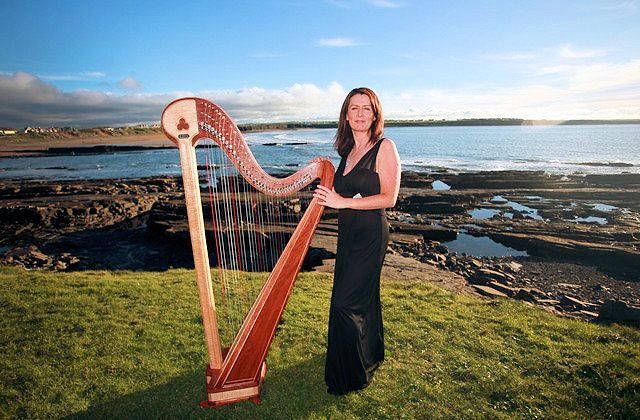 I have been performing at weddings and functions throughout Ireland for the past few decades. I sing with the Irish harp, play instrumental music and the Irish tin whistle. Every wedding and event is unique, every individual has their own taste in music; I am very happy to create a bespoke program for your wedding or event. My repertoire includes a wide range of traditional and contemporary songs and instrumental pieces. If you have a specific piece of music or song in mind, let me know and I will endeavour to learn new pieces provided they are reasonable requests for the harp.

I am a professional singer and harpist from Co. Clare. I have been performing at weddings, funerals and other functions in Co. Clare and throughout Ireland for the past few decades. Throughout my career I have played in Germany, Austria, France, the UK and the United States. I’ve recorded in Chicago and Nashville Tennessee. I’ve had the pleasure to sing alongside such great entertainers as Christy Hennessy and Foster and Allen at the symphony hall in Birmingham.

For the past two decades I’ve spent my summers as the main on site harpist at the world famous Cliffs of Moher in Co. Clare. Over the years I have met so many wonderful people from all over the world, I feel so privileged.

I was honoured to play at the grand opening of the new Cliffs of Moher visitor centre in February 2007, entertaining a host of government officials including Minister for Tourism, John O’Donohue and an Taoiseach Mr. Bertie Ahern.

To date I have recorded four albums and I hope to release my fifth in early 2018. I firmly believe that your wedding day should be an unforgettable event, and that your church songs and music are extremely important. I hope I can be part of your special day.